A plotted eight characters chart based on the HSIA calendar is also known as “BaZi” Ming Pan (Eight characters of life) or 四柱 Four Pillars of Destiny. Not limited but BaZi is primarily used for fate calculation and future prediction.

五行 Wu Xing the five stars/ planets or movement of it are the fundamental parts of 八字 BaZi the eight character chart also known as 命理 Ming Li, the knowledge of life, or 命术 Ming Shu, the technique of life.

The movement of the five closest planets in our solar system the "Wu Xing" is commonly translated as "Elements" while the five movements or the five star categories would come closer to its meaning. The five elements are Wood for Jupiter, Fire for Mars, Earth for Saturn, Metal for Venus and Water for Mercury.

The five elements characteristic and interactions can be used to grasp the momentum/flow of forces. Properly utilized one can take advantage to improve circumstances. The table below shows what the five elements represents:

五星 the five planets also interchangeably called the five stars have different size, mass, speed and electromagnetic fields. They resonate and vibrate on different frequencies. Depending on their position and distance, their gravity and frequencies interacts with each other in producing, weakening and controlling cycles.

In the producing cycle, one element produce/ amplifies another elements frequencies and energy level.

In the weakening cycle one element weakens/ drains another elements frequencies and energy level.

In the controlling cycle one element controls/ absorbs another elements frequencies and energy level.

When one element creates another element the created element weakens the creating elements frequencies and energy level.

Relationship of the elements to each other

The element in the upper part of the day pillar (day’s heavenly stem) is the 日主 Day Master. The characteristic of the elements are determined by the Day Master.

The element that is controlled by the Day Master is the wealth element.

The element that controls the Day Master is the influence element.

The element that the Day Master produces is the output element.

The element that produces the Day Master is the resource element.

The element that is equal to the Day Master is the companion element.

The planet Jupiter is the biggest planet in our solar system, it has twenty times stronger magnetic field than Earth's. It completes its cycle around the sun every twelve years. It’s been believed that it has high impact on Earth with its gravity and electromagnetic field.

太岁 Tai Sui the “The Grand Duke of Jupiter” is the twelve “Earthly Branch” of the year or in short the year branch which indicates planet Jupiter’s position around the sun. Each year/branch is depicted with animal symbols to be better memorized and is commonly known as the Chinese zodiacs.

The Month-Branch indicates the Earths position around the Sun and the transition of seasons. The Lunisolar calendar year starts with February and is depicted with a tiger. The beginning days of the months are not equal to the first day of the western calendar. Each of the twelve months are also depicted with the same animal symbols used for the years.

The Day-Branch indicates the moons position/ phases around the Earth. The day branches are also depicted with the twelve animal symbols. The day in month concerns us most in our daily activities thus the heavenly stem in the day is taken as the master regarding to other elements in the chart therefore it is called the 日元 Day Master.

The Hour-Branch indicates the Earth phase rotation on its own axis. Each Chinese Hour consists of two hours; the day is divided into 12 instead of 24 hours. The twelve animal symbols are also used to depict the twelve two hour blocks.

The Day Master interaction with the ten heavenly stems is Gods signs of subtle changes/transformation in the nature, commonly known and labeled as 十神 The Ten Gods.

The subtle changes of God or the ten gods are.

Determining the Day Masters and charts strength is one of the key components to interpret a BaZi chart. There are five elements hence five seasons, namely spring, summer, autumn and winter. The fifth season for the Heavenly Stem (celestial season) is the transition period from the outer planets to the inner planets. The fifth season for the Earthly Branches is the transition phase from one season into another which is the third month in each of the four seasons.

Each season covers a phase of three months and a quadrant of 90 degrees. Each element in the Heavenly Stems and the Earthly branches represents a specific phase in a season. The first 12 days of each month is the stronger part and the last 18 days are the weaker part of the elements.

The Day Master is at strongest when its elements season matches (is same as) with the earthly branch of the months season. There are five elements hence five seasons’ therefore five strength indicators of the Day Master. The indicators from strongest to the weakest are:

The ten heavenly stems elements and their representing celestial seasons.

The twelve months/earthly branches representing elements and their solar season.

Sample of a strong Day Master 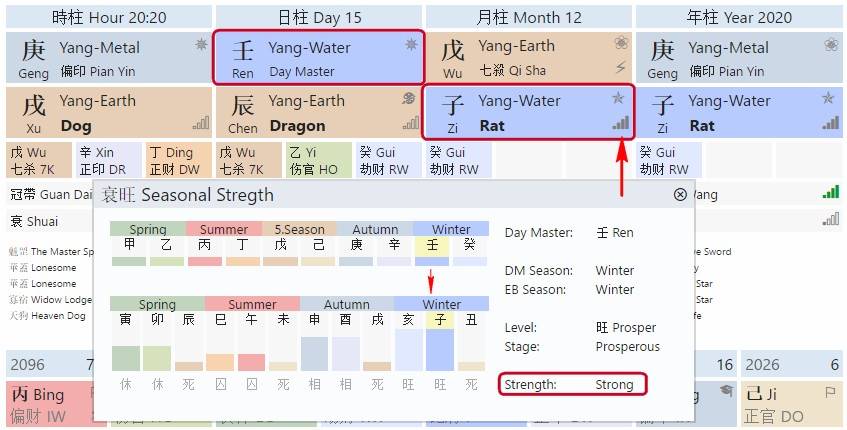 Sample of a weak Day Master

There are four (five) seasons and twelve months hence twelve different stages, the Day Masters Element in any given months season determines its life stage, vitality and strength.

An analogy of human life stages are used to describe the stages and strength of the elements therefore the strength indicator is called 十二长生, "The twelve Chang-Shengs" also commonly known as the 12 Qi/phases of life.

As a picture is worth a thousand words, a visualized 12 life stage indicator speaks for itself. 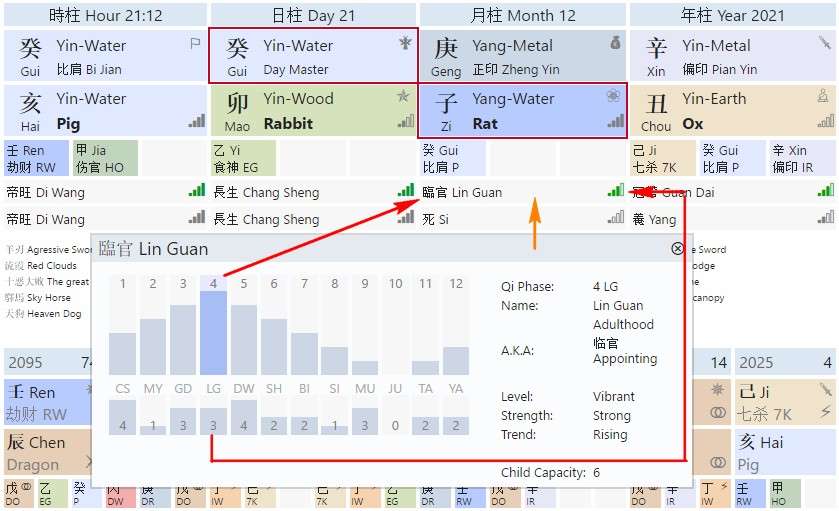 神杀 Shen Sha - The Influential Star is often known as auxiliary or symbolic star and could be translated as fierce/ evil/ devil/ spirit/ god/ star however interpretation to beneficial or influential daemon would come closer to its meaning.

Due to the fact that Shen Sha since its appearance has morphed during the evolution of the eight character calendars and methods therefore it is not always considered as an integral part but as extension to the BaZi chart. Commonly Shen Sha is assumed as mystical or arbitrary occurrence while in fact Shen Sha can be seen as the ancestor of the BaZi methods and is nothing less than asterism (fixed stars) on the Chinese sky map. In terms of Bazi, Shen Shas are mainly derived from the year and day column which represents the polar star aligned Jupiter nodes.

At some point in the past time the framework of the star alignment has morphed towards the twenty four solar terms alignment. The Shen Sha system can still be used solely or incorporated in the Bazi chart in case the scale and calendar algorithm is adjusted to match the polar star and asterism again, whether it’s useful or not, as the system is quite generic is an another story.

Quite often Shen Sha is promoted as evil or luck star to cause fear or excitement. Shen Sha is neither bad nor good but can be annoying or useful at times. Whether a Shen Sha is annoying, useful or just latent depends on your BaZi chart strength, structure and the position of the Shen sha.

In many cases the Shen Sha labels and meaning must not be taken too literal for two reasons, first the translation/interpretation of ancient Chinese can be sometimes challenging and second the meaning of the Shen Sha are not static but changes based on the BaZi charts constellation.

Shen Sha can be indeed for bad or good influential therefore the question should be not how to get it or see it on your chart but how to utilize it when its apparent.

For instance 天乙貴人 (Tiān yǐ guìrén) Heavenly Noble depicted with an angel with wings on the BaZi calculator and is considered as one of the best stars to be sought after. It is often interpreted as a blessing and heavenly guidance/support or appearance of helpful noble person however one must ask under which circumstances would the heaven offer guidance or when would one see an angel?

Another one, 桃花 (Táo huā) the Star of Romance, there are different type of this kind of star and all are known as Peach blossom depicted with a flower on the BaZi calculator. It denotes attractiveness and romance however also remember flowers are only beautiful as long as they are not plucked and wither sooner than later once they are.

Keep in mind that quite often without even the appearance of the Shen Sha our own behavior at any given time can create the same result for bad or good as well. Not limited but here the list of common Shen Sha The influential Stars.